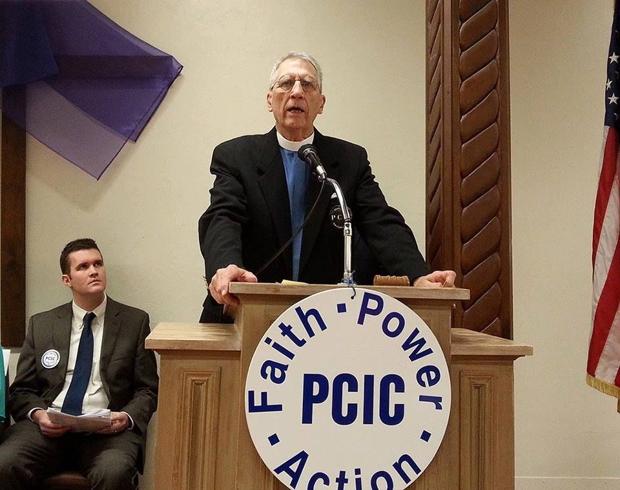 There will be a memorial service at St. Phillip's in the Hills Episcopal Church, 4440 N Campbell Ave. at 10 a.m. Saturday, March 12

Below are some memories, an article on Paul, and his obituary.

Early on I sought Paul out, because I always found his voice and thoughts to be sane, rational, and caring (with just the right amount of humor to break the tension of disagreements) — especially when divisive passions ran high in the neighborhood or there were outside threats to our community. I looked upon him as a mentor, chiefly when I was neighborhood president from 1996 to 1998, but many times afterward as well.

He had been doing, and continued to do, incredible organizing work throughout Tucson and beyond (see obituary below and linked article), thus his experience and way of being were often huge assets to our neighborhood. He was always very humble, and put a great deal of his energy toward helping fellow neighbors step up to, and lead many efforts that have preserved and enhanced our neighborhood and quality of life.

When we used to have a monthly newsletter (before budget cuts at the City removed the service of its printing and mailing), Paul had a column of insightful commentary from 2002 through 2003 titled, "The Seventh Generation in Dunbar/Spring", and in other years he would sometimes write an editorial. I always looked forward to these, because I felt they were full of heart and they invited us to celebrate and grow what makes our community rich.

BACK TO BASICS - An Opportunity to Build Relationships in Dunbar/Spring by Paul W. Buckwalter

We are fortunate to have the Back to Basics Program coming to the Dunbar/Spring neighborhood. Perhaps long overdue, the investment of $825K (minus the 25% that the city takes for administration of the program) will continue the turnaround of a neighborhood which 20 years ago was heading downhill.

The recent Back to Basics meetings have begun the process of determining what neighborhood residents want to do with the money. Beyond investment in infrastructure like parks, $$ for housing rehab, the Dunbar Project, speed humps and other similar projects, however, I believe we need to consider the Back to Basics program as a means, a method, or a strategy, call it what you will, to help people in the neighborhood invest more in the life of the neighborhood. We need to put our neighborhood in a stabilized, secure place.

This means we should use this grant as a way to help people get to know each other better, to build ownership not in infrastructure, but in each other. People invest in people and build neighborhoods through knowing who their neighbor is, and in knowing that there is the potential for building trust. This makes it possible for us to come together to fight for a higher quality of life in our neighborhood when it is necessary. What we need in Dunbar/Spring is not a cold process of determining how to spend some money which will fast disappear and will leave us with only a few new physical facilities. What we need in this neighborhood is conversation between people, political and personal conversation, and debate with a wider and broader base than we presently have with the thirty or so people who show up for the meetings. We need to engage with people, not just through surveys and meetings. We need to invest in the culture of our neighborhood.

Let me give some examples of what we need to do if we are going to build community, and relationships in our neighborhood:

When we survey our neighbors about what items and ideas they have for the Back to Basics program, we should spend some time just talking and listening to people after we knock on their doors. To just leave the surveys off and return for them later is a cold process indeed, and those of you who are veterans of the model city programs know what that is about.

Leadership in any community changes every two or three years, which for the most part is probably a good thing. Because my work has carried me out of the city for the past three years, I have found in my reentry to the community meetings that I don't know many people. The quality of the new leadership in Dunbar/Spring is very, very encouraging, but I don't think we know each other very well. I would recommend that early in the Back to Basics process we have some "down time" where we introduce ourselves, tell a bit about why we moved to this neighborhood, what we do in the work world, and talk about our home and family. This is just a first step in building community, but in the long run, this will pay off.

We should use the Back to Basics program as an organizing tool for more social events, such as mixing the report of the survey with a picnic or social event that helps people get to know each other better. Please, not another dry, cool, talking heads meeting. We need heart events in this neighborhood, where we can get out of our very bright heads into personal engagement, real conversation and real exchange between people.

These are three recommendations for us to think about, and I hope we do.

and below is his obituary co-written by Paul and his wife Casey:

Fr. Buckwalter, an Episcopal priest who served as Executive Associate at St. Philips in the Hills, Tucson, was recruited to broaden that church’s reach into the needs of the Tucson community. A longtime religious leader in Southern Arizona, he was a founding member of Pima County Interfaith Council, a founding board member of the Primavera Foundation, and a leader in the Sanctuary Movement.

Prior to moving to Tucson in 1984, he served parishes in Cincinnati and Alaska, as Health Director for the Penobscot Indian Nation in Maine, as Episcopal Chaplain at the University of Cincinnati and later at the University of Arizona. He was statewide organizer for the Arizona Interfaith Network and active for his entire professional life in the Industrial Areas Foundation’s community organizing efforts on behalf of social justice.

Following his service in the United States Army in Korea, he served on the faculty of the International Christian University, Tokyo. He later taught in the graduate planning departments at the University of Cincinnatti and at Seabury Western Seminary, Chicago. In his later life, he resumed his study of Zen Buddhism, begun while he was teaching in Japan.

Paul, known variously to family and friends as Buck, Moose, Bill, Peri, and Tall Paul, was a hard worker and adventurous traveller. He made his way to Haiti; the San Juan Islands; the wilds of the Alaskan tundra; Harlan County, Kentucky; Dr. King’s Poor People’s Encampment in Washington, D.C., Rome and Venice and many other sites through professional engagement and personal commitment. He maintained close friendships and joy in music throughout his life. In retirement, he remained a sports enthusiast, swimming, playing tennis, and hiking in the natural beauty of Arizona into his 80’s. He loved his families, of which there were several. He was a generous and kind man, both wise in the ways of the world and a devoted man of the cloth. He was beloved by all who knew him. He will be greatly missed.